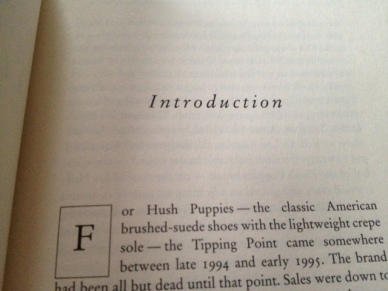 Malcolm Gladwell sets the stage for the Tipping Point by describing the rise in the sale of Hush Puppies, and the decline of New York City Crime.  Both events didn’t gradually change over time, but something (almost like the spread of a virus) caused a shift that seems disproportional to the effort behind it.

Gladwell describes how radical this idea can be for some of us because “We are, as humans, heavily socialized to make a kind of rough approximation between cause and effect.” (The Tipping Point, Page 10)  As I read this, I thought about how many times my mom and my grandmothers all had the same “we must all work really hard to make it” mantra.  Clearly, they were socializing me around this principle.

All around us, we regularly witness and even use the term “viral” to describe ways to market, or the latest video that a friend passes to us online.  Many companies, people, and ideas are trying to be that next overnight sensation by cracking some code, and getting past the tipping point.

Thanks for being part of this journey and I look forward to hearing from you.

What was the last product, trend, or idea you witnessed that seemed to spread like wildfire?  How did you either hear about it or participate in it?

Of the three characteristics Gladwell describes (contagiousness, little causes having big effects, and change happening not gradually but in one dramatic moment) which seems the most radical compared to how you usually think about events, changes or movements?

7 thoughts on “The Tipping Point (Introduction)”